Mental health stigma…just…sucks. And, to be honest, I’m one of the lucky ones. I had already completed a master’s degree in counseling (even though we never do great helping ourselves), thus, I could recognize some warning signs for when things were getting a little too out of control for me.

Almost seven years ago, I had my first bout of severe anxiety and depression. And for me, I mean severe. See, I was the person for almost my entire life that could take on more and more and more. Another committee? SURE! Your issues with your significant other/parents/pet/schoolwork? PILE IT ON! More classes/projects? LET’S GOOOO! I tried to keep all of this in check using methods I had used before–eliminating caffeine, planning ahead better, taking a little planned me time. Before I knew it, I was “better”- I had secured this fantastic job at a premiere college doing EXACTLY what I wanted to do with me life.

I get settled down at Lafayette, and, oh, I don’t know, right around day 3 or so…I can’t keep it together. Like…AT FRICKIN’ ALL. I’m having full-blown panic attacks in the middle of the night. I can’t be alone (not because I was having suicidal ideation, but I couldn’t fill my space with anything but thoughts, so being around people helped). I’m dry heaving at the sink in the morning and sobbing uncontrollably in the shower. My mother had to come and live with me for almost eight weeks. Luckily, we both knew something was severely wrong and we were incredibly grateful to find a doctor who would see me on such short notice. Thus began my journey on both anti-depressants and anti-anxiety meds.

The key here for me was the thoughts. It’s like every bad thing I’ve ever done (or semi-bad, or not even bad, but what if?) pops up and won’t leave. It’s like a demented game of Whack-A Mole, but my mallet is a feather and the moles are laughing and pointing. “Who did you think you were that you could do this job?” “You’re stupid.” “These people don’t like you, they just tolerate you.” “You’ve done so much more than this at once, what the fuck is so wrong with you that you can’t handle this?” “So weak.” “Things will never get better.” Oh and the all-time heavyweight champion of the world: “Look at how fat and disgusting you are, you’re worthless, nobody will ever love you.”

Previous solutions that always worked: Ignore. Rationalize. Remember that these things aren’t true. Read a book. Oh…and of course, house a cake…or…find a dick. See, I had developed some short-term responses that alleviated some of these feelings of inadequacy or at least distracted from them. I can’t be ugly if I’m sleeping with the 25-year-old former Division 1 lacrosse player, right? But as soon as the encounter was over, there I was, compulsively checking Grindr or Craigslist for my next piece to make the demons go away. Best part? And this is the thing I have rarely told people–very, very few of these encounters were ever reciprocal. I had convinced myself that I was so ugly, so undeserving of sexual pleasure, so incredibly gross that I didn’t even want the person to see my naked, touch me…no thank you very much. Part of this was internalized, and part of this was reality: if I was willing to make myself into a living Fleshlight (basically a sex toy), then I’d get more men, and more men meant less shitty feelings about myself. The problem (well, not THE problem since there are/were MANY), was that as I got older, fatter, balder, etc. it took more selling of my soul to get to the goal. This got me into “relationships” with people who stole from me, used me to get money for drugs, treated me like shit to get their own needs met…all the while I was telling myself, well, at least you’re not alone and isn’t 10% of the guy who has a wife who uses you to get off better than having nobody?

The good news is that I started a medication regimen and spent the next two-and-a-half years in therapy helping me to understand that I needed to spend more time thinking about how my decisions were impacting me. If my motivation in seeking out a sexual partner was to make me feel better because I was feeling lonely/gross/ugly/fat, then that wasn’t going to be helpful. If it was because I was a healthy mid-30s man who wanted to have sex, then hell yeah! Kick up those damn heels! (It helped that my therapist was a gay man!) I’m very mindful of this now and make much better decisions thanks to these interventions.

I’m sharing the above examples for a reason. I’m now over a month post-operative and everything about my life was going well until I noticed that my thoughts were starting to spiral. I was having extremely disproportionate emotional responses to little things. Starting to internalize the rejections that I had throughout my life–why were people all of a sudden not inviting me along to things that we previously did together? “Gotta be something wrong with me.” Why am I being rejected? “Still fat. Still ugly.” And the cycle starts, and the moles start popping up, but my even enhanced coping isn’t working. Now, I don’t even have a feather-mallet, I have no mallet. Oh, and the Entenmann’s cake- she’s not an option. Little Debbie and I have permanently broken-up. And I definitely don’t want to go back down the living sex toy path. And, I’m scared shitless.

After doing a little research, I discover that due to my surgery, there might be an issue with my medication being absorbed (I’ll find out more about this on Monday–finally). This definitely doesn’t at all make me regret having this surgery, by any stretch. I just would have liked to know that this was a possibility and thus I could be more on the lookout rather than having my emotions spiral out of control. I’m currently writing this from the 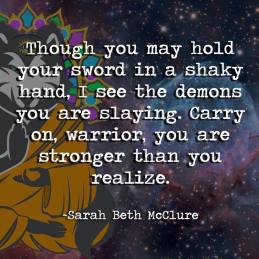 couch in my parents’ house because I needed to avoid some triggering, and frankly, so that I wouldn’t be physically alone. I’m keeping my anxiety in check with some fast-acting meds that are working, but my long-term anti-depressant/anti-anxiety medication isn’t helping at all. My sword is in fact, very shaky. I’m trying to build up my armor again and relying on friends and family to listen and be there for me when I need them. To remind me that, yes, my needs are important and should be valued. And that those demons are wrong.

Here’s my weight update, which makes me incredibly happy to share:

One thought on “Mental Health Whack-A-Mole”